Get Started Today!
ACCESS OUR SCHEDULE
Get a FREE Class and take a look at our Specials!

By opting into the web form above you are providing consent for Team Silva Martial Arts Academy to send you periodic text messages. Standard rates may apply. You can reply HELP at anytime or learn more. You may opt-out anytime by replying STOP.
ACCESS OUR SCHEDULE
Get a FREE Class and take a look at our Specials!

By opting into the web form above you are providing consent for Team Silva Martial Arts Academy to send you periodic text messages. Standard rates may apply. You can reply HELP at anytime or learn more. You may opt-out anytime by replying STOP.

You can't ask for a knowledgeable and professional instructor. Great for people looking for fitness, sport, or self defense!

Fantastic instruction and great family friendly environment! Great place to expand your martial arts ability and get in better shape.

Great place to train, stay motivated, and get in shape!

Great BJJ Academy for all ages! Sergio and his Team are great with the kids!!

Sergio was very welcoming and taught some great stuff to my girlfriend and I who were just dropping in while visiting from out of town.

Anyone not giving this place 5 stars doesn't understand how the internet works ?
Sergio and Rebecca have built an amazing community of caring and dedicated people who will go to great lengths to give you new tools and techniques in your search for gains.

If you are looking to learn the art of Brazilian Jiu-Jitsu this academy has got alot of the best trainers and techniques. The head Professor Sergio wins a lot of black belt tournaments.. his in depth knowledge of BJJ can not be found at to many places. I would say he is a black belt of black belts as he has so much experience competing and coaching. Also it is a really down to earth academy with friendly people who are cool to train with.

Best BJJ in the Bay Area! This is the real deal, multiple times world champions here.

Wonderful, welcoming academy for all ages, abilities, fitness levels and goals. From Sergio down and across the board, everyone is approachable, welcoming, respectful and genuinely interested in making everyone else's experience as rich and rewarding as possible. If you're nervous about whether this is the right place or the right way to get fit and learn to protect yourself and your family, stop: you've found it.

Amazing local business. Generous to the community, nurturing for both adults and especially children, young adults. They offer both self-defense proper and fitness approaches. They also have a sister yoga studio next door that accommodates moms-to-be, heated, mommy and child, advanced, beginner, etc. level yoga practices. I would encourage all Alamedians to visit Team Silva and Alameda Yoga.

My only regret is that I didn't start training here earlier! Its the perfect location for BJJ and Yoga... what a perfect combination. Sergio always welcomes you with a smile and makes you feel part of the bjj family instantly.
I will miss this place dearly since I'm moving to SoCal.

Come train with World and NAtional Champion in Brazilian Jiu-Jitsu in Alameda.

Come train with World and NAtional Champion in Brazilian Jiu-Jitsu in Alameda. 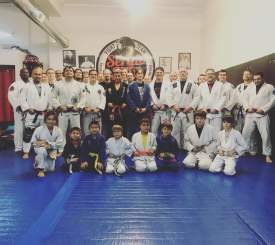 Professor Silva started his career in Martial Arts in the year of 1981 in the city of Curitiba.It was with his uncle Edgar Barreto and Professor Sergio Silva’s older brother,Julio Cesar Linhares e Silva.

We used to train Judo on Monday,Wednesday and Friday and on Saturday my older brother Julio used to bring friends from other martial arts to train together.We had a Tae Kwo Do Black Belt coming to share ideas and techniques,two karate black belts,one specialist in Kung Fu,few black belt in Judo and even a sumo fighter among all the other styles of MArtial Arts.Theere was also an expert in Capoeira who used to show us very unique and cunning ways to strike people in street altercations.

Professor Sergio Luiz Linhares e Silva is now a well know 4th Degree Black Belt with over 18 Black Belts spreading the legacy of Jiu-Jitsu all over the World. 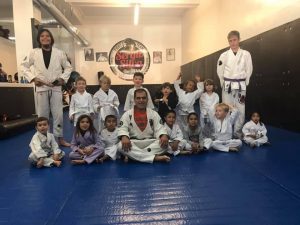 Now days we provide our dream place with combination of several programs available to our community here in Alameda. 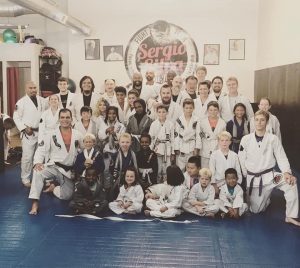 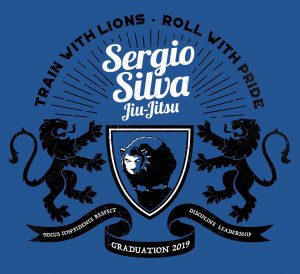 Professor Sergio Silva is also undefeated in the professional level of BRazilian Jiu-Jitsu in a league that call Fight to win.Fight to Win is a professional Jiu-Jitsu league where professor Silva has 3 fights with 3 Wins.